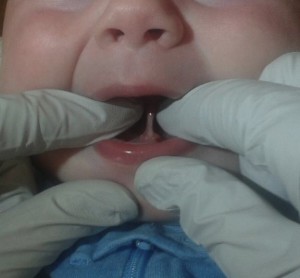 Breastfeeding always hurt for first- time breastfeeder, Tina. She was given a nipple shield to help with the pain. And it did help. Even so, she knew a nipple shield was not a long-term solution. She kept trying to get rid of the shield. She hated the thing! But every time baby latched without it it, it resulted in intense nipple pain and wounds—her nipple was painfully creased after feedings as well. So, understandably,  she continued to nurse with the shield.

Meanwhile, baby Carolyn wasn’t gaining weight well. At every appointment she was gaining about ½ of expected weight gain. Baby was breastfeeding frequently—over 10x/day and still not gaining appropriately. She was having infrequent bowel movements, was gassy, and uncomfortable. Tina felt that something was very wrong.

This determined parent went to many professionals to try to get help. Pediatricians and lactation consultants told her that her baby was not tongue tied and that a tight labial frenulum (lip tie) does not impact breastfeeding.

The pediatrician was concerned about baby Carolyn’s slow weight gain, but did not think a frenotomy was the answer. Her solution was to have baby start with some table foods a little early to try to increase weight gain rather than supplement with formula. It didn’t work. Baby was growing too slowly; still unhappy and not really thriving.

Then, at 6 months, little Carolyn suddenly refused to latch with the nipple shield and the only way Tina could feed the baby was at the bare breast. The pain was terrible, so she did even more research on her own regarding tongue and lip ties. She noticed that baby’s upper lip pulled in when breastfeeding and baby couldn’t maintain a good suction on the breast alone. It seemed even more clear to her that something was really wrong, once the nipple shield was not being used. 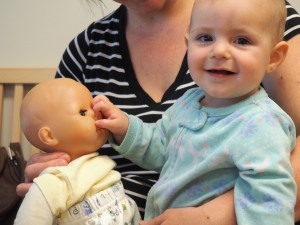 This busy mother of 2, took it upon herself to research preferred frenotomy providers in her town and ended up seeing Dr. Chenelle Roberts in Seattle. Dr. Roberts agreed that both tongue and lip needed to be released and did the procedures.

At the follow up 6 days later, mom was beaming! Baby was staying on the breast for longer periods and actually getting full! She was sleeping longer at night. She was less gassy, was pooping normally and was over all happier. And the best thing was that there was no more nipple pain. Oh and one more thing… Baby Carolyn’s weight gain exceeded recommendations. She had gained more in one week than she had been gaining in the 2 weeks prior to the procedure!

I’m thrilled that this dyad got the help they needed; but angry that this parent’s concerns were not taken seriously and that she had to wait so long to find a solution.

If you suspect that your baby’s breastfeeding problems may be due to a tongue or lip tie, please don’t give up!  Find a knowledgeable IBCLC in your area who can point you in the right direction so you and your baby can both enjoy breastfeeding.