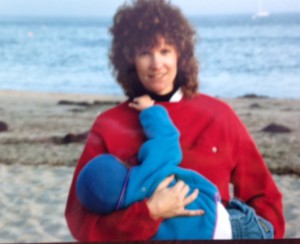 Nursing my toddler helps us get through a day at the beach!

I am often asked, “How long should I breastfeed my baby?” My standard answer is “As long as both of you desire!” But sometimes parents are looking for more details about what is normal and what is the expected age of weaning. I usually quote from one of the leading experts on this topic, Dr. Katherine Dettwyler. Dr. Dettwyler is an Anthropologist who, among other things, studies breastfeeding from an anthropological perspective. Her research has been a gift to our profession and to mothers and babies all over the world.

Since I am asked this question so frequently, I decided to write a post about the subject. And since I see no need to re-invent the wheel, I asked Dr. Dettwyler for her permission to post this excerpt from her paper, “A Natural Age of Weaning.” Thank you, Dr. Dettwyler, for your gracious permission to reprint a portion of your paper here:

My research has looked at the various “life-history” variables (such as length of gestation, birth weight, growth rate, age at sexual maturity, age at eruption of teeth, life span, etc.) in non-human primates and then looked at how these variables correlate with age at weaning in these animals. These are our closest relatives in the animal kingdom, especially gorillas and chimpanzees, who share more than 98% of their genes with humans. I came up with a number of predictions for when humans would “naturally” wean their children if they didn’t have a lot of cultural rules about it. Some of the results of that research follows:

1. In a group of 21 species of non-human primates (monkeys and apes) studied by Holly Smith, she found that the offspring were weaned at the same time they were getting their first permanent molars. In humans, that would be: 5.5-6.0 years.

2. It has been common for pediatricians to claim that length of gestation is approximately equal to length of nursing in many species, suggesting a weaning age of 9 months for humans. However, this relationship turns out to be affected by how large the adult animals are — the larger the adults, the longer the length of breastfeeding relative to gestation. For chimpanzees and gorillas, the two primates closest in size to humans and also the most closely genetically related, the relationship is 6 to 1. That is to say, they nurse their offspring for SIX times the length of gestation (actually 6.1 for chimps and 6.4 for gorillas, with humans mid-way in size between these two). In humans, that would be: 4.5 years of nursing (six times the 9 months of gestation).

4. One study of primates showed that the offspring were weaned when they had reached about 1/3 their adult weight. This happens in humans at about 5-7 years.

5. A comparison of weaning age and sexual maturity in non-human primates suggests a weaning age of 6-7 for humans (about half-way to reproductive maturity).

6. Studies have shown that a child’s immune system doesn’t completely mature until about 6 years of age, and it is well established that breast milk helps develop the immune system and augment it with maternal antibodies as long as breast milk is produced (up to two years, no studies have been done on breast milk composition after two years post partum).

And on and on. The minimum predicted age for a natural age of weaning in humans is 2.5 years, with a maximum of 7.0 years.

For the full paper: http://www.kathydettwyler.org/detwean.html