In honor of World Breastfeeding Week, I’m making a toast: Here is to trying again. Here is to providing the best for my baby. Here is to hard times. Here is to when you thought it was all over and starting anew. 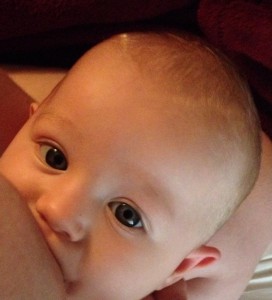 The back-story from Shelly:

I am in the process of getting some health issues under control which I know has contributed to declining milk production since about 5 months. So now, at 7 months, my daughter shows little interest in the breast. If I completely stop providing milk for her now, would it be possible to re-establish in a couple months once I can get my own body under control? I have PCOS and thyroid issues and it has taken a while to get into a doctor to re-test hormone levels and get it treated. I would love to keep giving her breast milk once I can produce again, but I really need to focus on me right now.  I am exhausted every day to the point where I can barely take care of my daughter. Adding in pumping would be too much!

Renee’s response: I think what you’re saying is that pumping would be too difficult for you with your health issues? Yes it’s possible to re-lactate. but not easy.

It’s nice to know it is possible. I just didn’t want to get my hopes up if there was little to no chance at all.

Here’s an update from Shelley.. a month later:

After my milk supply decreased, I started my baby on solids and tried formula, but wasn’t happy with it. I switched to a EU (European) brand that I still use now. Over the past 2 1/2 months, not surprisingly, my supply dwindled to just about nothing.  I had realized that getting to 6 months with breastfeeding was a huge thing to be proud of; something most women in my family never got to experience.  After learning that it was possible to get my milk back,  I decided to try last week. It was time to get back into it, no matter how hard it was. So I started pumping again. She needs my milk. If I never can 100% breastfeed again, that is fine. But I want her to want me when she is hungry, not the bottle. This morning I tried to breastfeed for the first time in many weeks. She latched on!! It only lasted a minute or two, but it was something. It was a start. There is now hope that I am not insane and this could actually work.Thank you for your support and encouragement!

Thank YOU, Shelly for sharing your story with us!

Note: If you are interested in resuming breastfeeding after cessation, please contact an IBCLC experienced in helping with relactation and inducing lactation. She can help you develop a plan that is right for you.