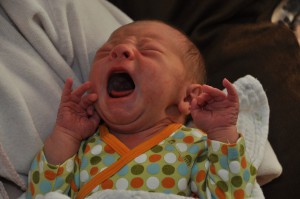 I met a darling baby last week who was obviously tongue tied. By obvious I mean that his tongue was not only visibly anchored to the floor of his mouth, but the mobility of his tongue was severely restricted. All signs indicated tongue tie. He cried frequently through the day with severe gas pains. He could not move his tongue side to side and there was almost no elevation when he cried. When he nursed, his tongue “snapped back” repeatedly. The snap back prevented him from keeping a strong vacuum at the breast, leading to noisy breastfeeding, slipping off the breast and sore nipples for mom. He was so noisy with smacking sounds and squeaky swallowing that his mom nicknamed him “Squeaker.”

I did what I could to help with comfort measures for the mom—optimizing the latch so she would be more comfortable, and we discussed options for addressing the tongue tie. Dad had had his frenulum released just a few years earlier so they were familiar with frenotomies and were positive about the procedure for their son. They scheduled the procedure with an experienced Dr. right away.

About a week later I saw the baby again. Now it’s important for the reader to know that good lactation consultants are very curious people. And we tend to be extremely interested in frenotomies and the appearance of the tongue after it has been released. I would expect to see a diamond shape at the base of the the tongue—indicating that the frenulum at been clipped deeply enough for maximum effect. I would also expect to see little or no frenulum remaining.

I took one look inside this little guy’s mouth and saw, not a diamond shape, but a frenulum. Not as restrictive as before, but definitely still there. The parents had noticed it too, and we talked about the possibility of having to go back and have it clipped again. But then I did the assessment. Elevation? Good. Lateral movement? Excellent. Snap back? Non-existent! Then the baby breastfed and there were no more “smacking” sounds. No more loud swallowing. And no more losing vacuum. The parents also reported that baby was happier—no more painful gas!

This baby and the skilled Dr. who released the tongue, taught me a lesson that day. Appearance is just one piece of information when deciding about tongue ties. Function is everything. The Dr. likely saw the effect of the clip as he was doing it and made an on-the-spot decision about clipping deeper. He made a good call. And the baby is “Squeaker” no more!

2 thoughts on “Squeaker: A Story about a Tongue Tie Release”