The following is a guest post from Beth Martin. Beth is a certified Nutritional Therapy Practitioner (NTP) in Seattle, and the owner of Small Bites Wellness. She is passionate about whole food nutrition for the whole family and believes that ANY change you make in the pursuit of your health, or your child’s health, is worthy. Health is a journey, not a destination. Please contact Beth for questions about your family’s nutrition. 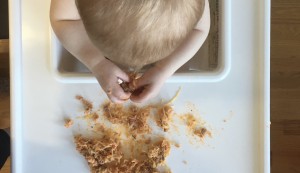 For decades, rice cereal has been the recommended first food for infants, sometimes as early as two months of age. In recent years, some doctors, nutritionists and the American Academy of Pediatrics (AAP) have begun to change their stance on rice cereal.

The AAP recommends that infants be exposed to a wide variety of flavors and textures, and states that they are more likely to eat foods they see their parents eating. Given this, and the AAP’s guidelines to meet developmental milestones prior to starting solids, we are at a great place to rethink what we feed our children for their first foods.

So why do many pediatricians continue to recommend rice cereal as a first food? Here are the two main reasons, and why I don’t agree with them.

The main reason for the popularity of rice cereals is that iron-fortified cereals have been recommended to ensure infants receive adequate iron. Around six months of age, an infant’s store of iron begins to decrease. Iron is crucial to brain development and is needed to create hemoglobin, among many other roles in the body. Clearly, iron is important.

But is rice cereal the best way to ensure infants receive iron? Rice is not a natural source of iron. The iron available in fortified cereals is not always processed in the body the same way as naturally occurring iron, and fortification can lead to too high of iron levels. Studies have linked synthetic iron supplementation in cereals and formula with lower IQ and increased pathogenic bacteria in the gut.

There are many whole food sources of natural iron that are appropriate as a first food for infants. Heme iron (from animals) is a great place to start, as it is absorbed at higher rates than non-heme iron. Examples of foods rich in heme iron are egg yolk, meat, and fish. Chicken livers are particularly high in iron and a traditional first food. Meat and eggs as first foods have been shown to provide adequate amounts of iron, zinc, and DHA for infants.

Aside from introducing rice cereal for meeting nutrient requirements, doctors have often recommended that parents add rice cereal to bottles to help with infant sleep. Studies show, however, that there is no significant difference in the ability to sleep through the night between infants fed rice cereal and those that were not. In addition, some doctors worry that adding cereal to a bottle can override an infant’s innate mechanism to know how much food he or she requires.

There are no adequate and well-controlled studies on the safety of Ambien (Zolpidem) during pregnancy. Animal studies have shown no evidence of teratogenicity or infertility. However, they identified such side effects as incomplete ossification of fetal bones and increased embryonic mortality.